Lately I'm finding that crowds do not bother me nearly as much as they used to. This came very handy this moring on our trip to the Houston Children's Museum. This place is AWESOME! Mark and I took the kids once when we first moved back to H-Town, but haven't been back since. For spring break, Naomi and I took the kid-o's, and though it was VERY crowded, we had a GREAT time! A couple of years ago they had a small mock supermarket, btu they've really beefed it up since then...now, they have 'Kidtropolis" which is supposed to be a mini city! It has a vets office where the kids can dress the part and pretend to examine and groom stuffed animals. There is an HEB grocery store where the kids can shop and use real debit cards to pay. There is a diner where the kids can pretend to prepare oven baked pizzas and fried onion rings and then serve them. There is a bank, a city utilities center (kid sized ambulence and police car!), a news station, and an Art studio. Everything is real, but kid sized! The debit cards can be recharged with "money" by working at the vets office, diner, etc... It is so cute! You can guess where we spent most of our time... 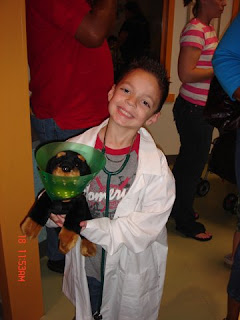 Austin pretending to be a vet 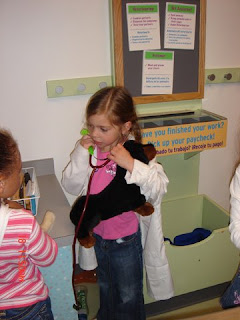 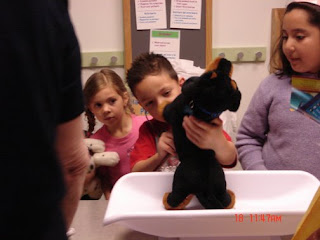 They were giving their pup a shot!
There is so much to do and see at the museum, we hardly made a dent! They have a "LAB" that the kids have to don lab coats and goggles to enter- they have little connecters to make molecules and such- lots of different science things 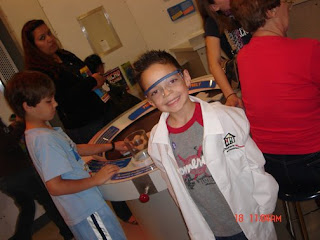 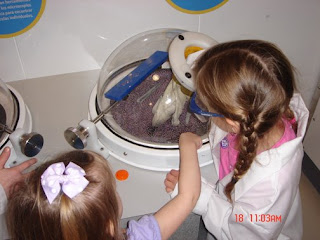 Abi and Grace conducting an experiment 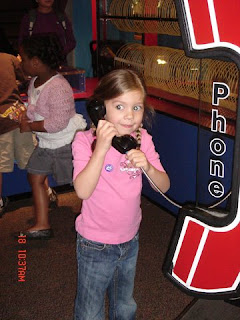 Abi on the phone
Because there is so much there to do, and because it was so crowded, I told the kids that we would go back on a day that is less crowded! They had a blast!!!
Posted by The Brewers at 4:23 PM