I am so excited about the possibility of homeschooling, I can hardly contain it! The idea first started weighing heavily on my heart the other night on the way home from small group. Mark went to a concert with his cousin, and the kids and I did the usual, small group. In the car on the way home, Austin asked where daddy was. I told him at a concert, and Austin responded with "why does daddy work so much, why is he always gone?" Now, those of you that know Mark, know that he is a big kid too and is always playing with the kids. I think Austin was stuck on the fact that Mark was not there at that moment! I told him that I was there, and asked him why he never wanted to play with me. He said because he doesn't want to bother me. Those words broke my heart...I never want Austin or Abi to think that they bother me! Then, Friday night, I attended a women's retreat with some of my friends. One of my friends home schools her son and has essentially lighted the fire in me to home school! There are so many contributing factors of why I think homeschooling would be a good idea for my kids. After discussing it over coffee last night, I'm even more excited!!! We even discussed starting our own co-op so that some moms could work part time if they wanted. I would still continue to go to class as well. I am not sure how all the details are going to work out, or even if they will...but I know that my heart is in it! So, for now...diligent prayer!
Posted by The Brewers at 10:21 AM 1 comment:

This weekend has been one of those regular two day weekends that you try to shove 5 days worth of activities into! Friday afternoon I baked the cake for Lizzie's baby shower, Saturday evening, and worked on my book report due Wednesday. Saturday morning started with family breakfast, then family chores, then more food prep for the shower. At 3 we went to the church to decorate for the shower, most of which Mark had to do because I'm WAY too short! The way it was set up, there were clothes lines that ran from a mobile wall divider to the wall. They were all good until Mark left to go home...not a minutes after he walked out of the door, they both fell!! At that point I started to panic because I still had stuff to prep! Not to worry though, everything worked out well, we fixed the line and everything turned out the way I hoped it would...the girls getting together for food, fun, and laughs! 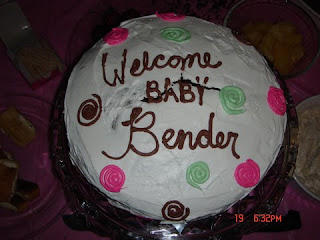 unfortunately, the cake cracked right down the middle!! 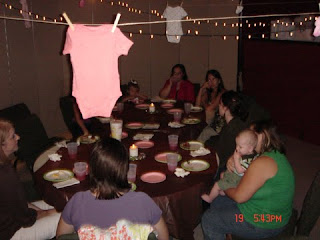 Sitting around enjoying the food 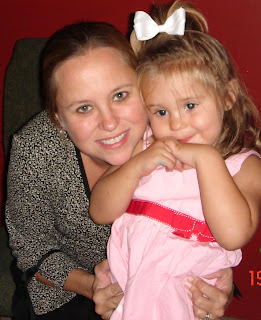 Lizzie and Kelly
Following the baby shower, Mark, the kids, and I rushed over to Carino's for my birthday dinner with my mom and sister. Yummy food and good company- I love just sitting around talking with my family!
Sunday morning, we woke up bright and early. Austin had to be checked in for his baptism by 9:15 and we had several people that needed showers! It was a wonderful day, and Mark and I are so proud of Austin and his decision to follow Christ. He was SUPER excited! Lots of family came into town to watch his baptism. There were so many people there to support him- I want to record everyone so I have a record!
Papa and Nancy Brewer
Grandpa Brewer and Ms. Wendy
Grammy Kellum
Aunt Marie
Lala and Kinzie
Aunt Lisha, Adam and Alayna
Ms. Naomi and Grace
Brandy and Becca Parker
Team Robo
Terry and Sarah Domino
The Ayon family
Wendy and Xamodd
Because our small group works on Sunday mornings, some of them weren't able to make it...but I know they wanted to be there! We are so blessed to have such loving people in our lives! 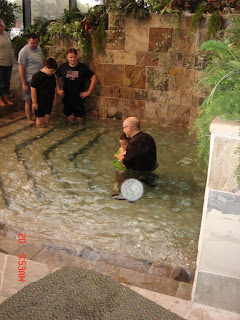 Although we had to squish so much stuff into one weekend, I am thankfull for the memories!
Posted by The Brewers at 3:28 PM 1 comment:

Fall is in the air

The kids had fall photos at school last Friday. They were both really excited! Thursday night we tucked Abi into bed. About 10 minutes later she came out to remind me that if we wanted pictures of Austin and her that we would have to "pay money for them". I found this kind of funny and reassured her that I would take care of it. She is really getting the hang of school- she has been singing some of the songs that they start their days with. The songs even have dance moves! Austin has not had one bad day- he even got a good note home for working well on his class work. He really is maturing! 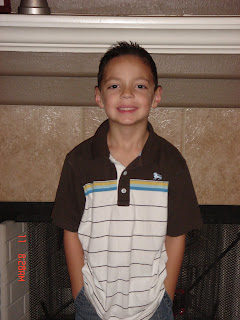 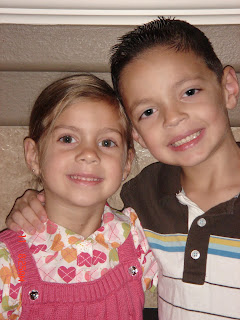 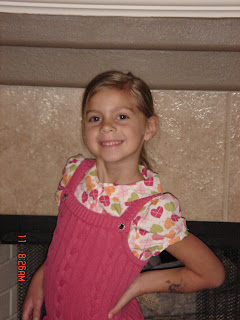 Before fall photos-Abi and Austin
For those of you that know me well, you know how increasingly excited I become each day we move closer to the fall. My favorite scent is pumpkin spice/oatmeal cookie/cinnamon and pumpkin- all of those yummy, yummy fall scents! I found pumpkin spice glade plug-ins today. They have posted in their positions and now the sweet aroma fills the house! Did I mention that I LOVE FALL?!? My door decoration adorns the front door, and my hand painted fall candle holders have made their way to the dining room table. Turkey day and family are soon to come! 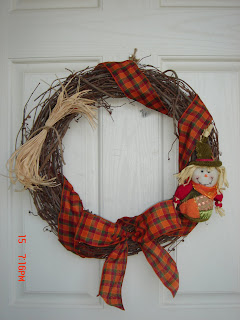 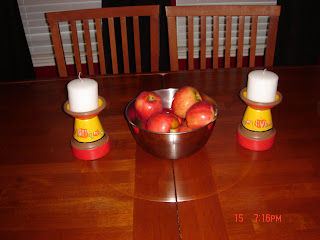 fall table
Posted by The Brewers at 7:49 PM No comments:

Not too much has changed since the last blog. The kids are really enjoying school, although Abi confuses the weekend with summer vacation. She asks me everyday "mommy, how many more days until summer vacation?" Last night we had open house, which I was very pleased that the school planned it out differently this year! Last year, they made certain grade levels go on certain nights...and you didn't get to really see the kids' work, they asked you to watch a PowerPoint slide about Title I schools. That was disappointing! This year we were able to go to both classrooms and the kids showed me the stuff that they have been working on. Austin only has one teacher this year, teaching him all subjects but math (I guess they give her a break or something, I don't know!!! j/k) She taught for 17 years in many different countries. That is neat, I'm sure Austin will learn a lot from her. She seems very gentle and nurturing, another quality I like! Abi's teacher is also very nice. She has been teaching for 7 years, and her husband is a Marine. Both have kids, so that is a plus as well! Abi's teacher seems a little more firm, which Abi needs!

We have a lot going on this month. Austin prayed to accept Christ in July and has finally finished his "First steps" class to be baptized. He will be baptized on September 20- an event we are very excited about. I am the mommy that cries every time I see a baptism video, with hopes that one day my kids will be baptized! He also mentioned the other day that when he grows up, he wants to travel the world to sing songs about God!! This one I find funny, because anyone that truly knows Austin, knows how much he LOVES to sing! Abi followed Austin in saying "when I grow up, I want to be a ballerina and dance to songs about God." They are definitely into trying to top each other these days. I can't wait until they outgrow it...?
We have had some slow moments too. We try to have a family movie night every so often. We have been waiting patiently for The Wizards of Waverly Place movie to come out on the Disney channel. It finally did, so of course, family movie night!!!! And as you can see...Abi is a Daddy's girl! Also, funny story, the kids and I were driving in the car. Abi asked for a wet wipe (I keep a pack of the wet ones in the car!). I was thinking she had something sticky on her hands or something...no, we get out of the car and I realized she had used the wipe to apply a HUGE temporary tattoo on her forearm! That kid... 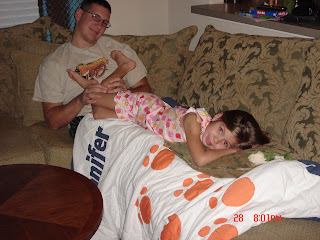 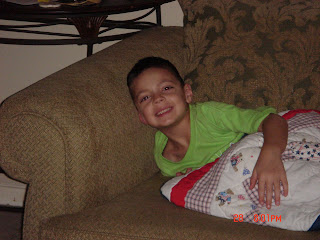 Abi and Mark Austin
I am still anticipating my payment for my GI Bill for school. I am trying not to stress about it, but I had to pay out of pocket for my books...something I was hoping I wouldn't have to do! I wish I had control of the situation, or could at least contribute to fixing it!!! It's frustrating just waiting...on the VA...to come through!
I'll leave you with a line from the song stuck in my head..."Greater things have yet to come, greater things are still to be done in this cityyyyyyyyy... There is no one like our God, there is no one like our God."
Posted by The Brewers at 2:21 PM 2 comments:

back to school and the dogs ate the carpet

I've already posted pics from the morning of the first day of school, but not from the afternoon. Mark brought the kids special gifts (maybe a new tradition?)- Austin got cookies (which Mark ended up finishing off!!!) and Abi got flowers (which Mark gave her for her birthday and she has been asking for more of ever since!!!) They had a wonderful day. Abi came running off the bus yelling, "Mommy, I got to do math! It was so fun!" Although, by Wednesday, the newness had worn off for her because she had to sit in time out Wednesday and Thursday for talking too much! What can I say, she's a social butterfly?!? We haven't had any other bad days since though...I threatened to take TV time away (from the child who claims to have a TV in her head). She has gotten a happy face/star stamp ever since! Austin has not had one bad day. He says his teacher is great because "she lets us have a resting quiet time after recess!" (Boy, is she good!?!) 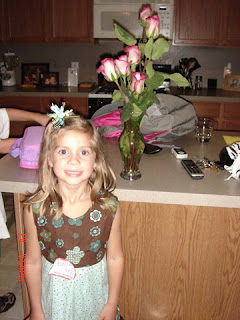 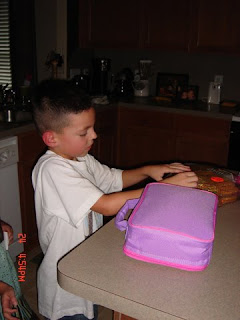 Abi with her flowers Austin with his cookies from Daddy

Next, is nothing too big. We had some apples with bad spots...what do you do when you don't want to waste the fruit you paid and arm and leg for? Bake an apple pie...that's right, fresh, from scratch, homemade apple pie! Boy was it yummy with vanilla ice cream! Now that you are all drooling...I'll move on! 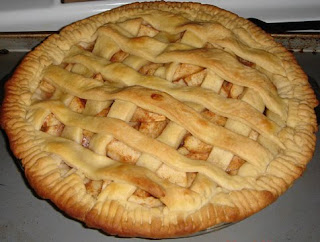 So, last week was also my first day back to school. Which, I have let my temper cool down long enough, I can now discuss it! On my first day Tuesday (many of you felt my frustration on Facebook), it took me 2 hours and seven minutes to park. I ended up missing my first class of that day, but managed to make it to my 1 o'clock class. When Mark and I are gone, we leave both of the dogs out of their crate...but Bandit is locked in our room and Peaches gets the rest of the house. We have to split them up because if they are left together, they will eat the furniture and anything else they can get their teeth on! I came home after that VERY long day to find that Bandit had eaten or scratched up the carpet right under our door!!! I was pretty mad, especially since he had chew toys available! Needless to say, he is now being detained in his bed on school days! 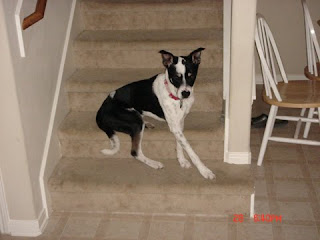 To end on a positive note, check out this sunrise that the kids and I got to see this past Friday. Absolutely beautiful! God really is quite the artist! 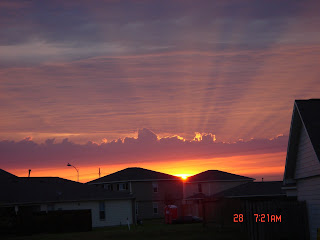 From the front porch
Posted by The Brewers at 9:23 PM 1 comment: