So, I'm literally and figuratively speaking here...These past couple of days, Cypress has received an overwhelming amount of rain! We woke up this morning to many flooded streets and no school. In our area, about 8-10" of rain fell, leaving some underpasses under 6+ feet of water! Our church even opened as a Red Cross Shelter, Mark and I are both on the response team, they asked if Mark could stay overnight tonight! It's crazy!

Now figuratively speaking...there is so much going on right now with us! It's the end of the semester for my classes. I have one final next week, and another the following week. I have two papers due Monday (which I am trying to avoid working on at this very moment). I have a meeting with my advisor tomorrow, so I've been trying to figure out which classes I can take based on how well they work around everyone else's schedules. The VA is now accepting the post 9/11 application paperwork for the gi bill...filled that out, just another stressor. Mark's grandmother passed away last Wednesday, so the close of last week was filled with the kind of stuff you do when someone passes...not very fun! A little added drama was dealing with Mark's mom and her state of mind right now! We also missed Abi's pictures and first t-ball game, though she made it (thanks Wendy, again!) On top of that we have friends that are in a rough patch that are leaning on us, and weighing heavily on our hearts. If it isn't one thing it's another...for some unknown reason the breaker in our room keeps tripping if anything more than the alarm clocks is turned on. Added to that, the breaker for the washing machine tripped today, and now it's not spinning! Mark's windshield wipers on his car stopped a while back...I would prefer to fix it ourselves, seeing as how that would more than likely save us money. Thursday grocery shopping, not my favorite thing in the world! I also anticipate standing in line Friday at the courthouse to order a replacement tag for my truck...yea...Austin turns 7 next week, and I am not certain what exactly we are doing for his birthday yet. So much going on, and I just want to go take a nap!!!!! Now I actually know what it means when someone says, "When it rains, it pours!"
Posted by The Brewers at 3:36 PM No comments:

In this economy, a promotion of any type is hard to find. At least that's what I was thinking to myself until Mark got home yesterday. I have been stressed because with me not working (ie no second income) I was worrying about the fact that I wanted to take the summer off from school (not getting my GI bill over the summer). I knew that we would make it financially, but I was also aware that money would be very tight. I gave it to God. I have been praying daily about the stress that seemed to get stronger as we got closer to the summer months. I prayed that God, knowing that my greatest weakness is worrying about finances, would just make something happen. I should have never doubted God. Mark came home yesterday with a great announcement...He got a promotion at work which he will start training for June 1st (which happens to be the last month that I will receive my GI bill until fall!) WOW! GOD IS GOOD! He will always provide!

Do Not Worry
25"Therefore I tell you, do not worry about your life, what you will eat or drink; or about your body, what you will wear. Is not life more important than food, and the body more important than clothes? 26Look at the birds of the air; they do not sow or reap or store away in barns, and yet your heavenly Father feeds them. Are you not much more valuable than they? 27Who of you by worrying can add a single hour to his life[a]?
Posted by The Brewers at 12:24 PM 3 comments:

Okay, so the past couple of weeks I have spent/wasted some of my VERY valuable time writing papers for my classes. This week alone I had to turn in two. The first paper was over homosexuality and the role sexual orientation plays in school aged children...really...and the second was over adolescents and advertising. I had to watch two commercials and analyze them according to how adolescents are influenced. I came across the funniest commercial EVER in my hunt! I also have 4 more papers due in the next 3 weeks...yeah me! I'm ready for a break from school, mainly from thinking! Anywho...that's my complaint of the day.

PS on the way to U of H this morning, after I spent 20 minutes waiting in traffic to just enter I-45. Some lady thought it would be cool to cruise in the other moving lanes and then cut me off...bad idea...I had no problem not letting her in, and was tempted to give her a lesson in courteous driving. I just gave her the stare down and signaled her to continue in the lane she was already in and do a U-turn down the road if necessary...she was not happy about it, but she did not cut me off either...Gotta love Houston drivers...
Posted by The Brewers at 5:05 PM No comments:

We had a VERY long but exciting day! We woke up very early this morning so that Mark, Me and Austin could all go to the 8am service. Mark and I both worked in the 930 and 11am services, and then we headed home for an Easter get together with our neighbors and church family. The kids were so excited! It was a stormy morning, but by the time we made it home and out for the Easter egg hunt, it was a very beautiful and sunny day. I love being surrounded by our friends and family, it's one of my most favorite things. 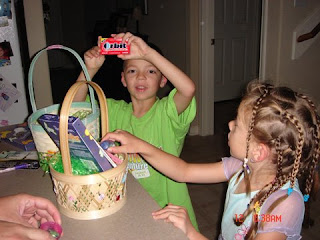 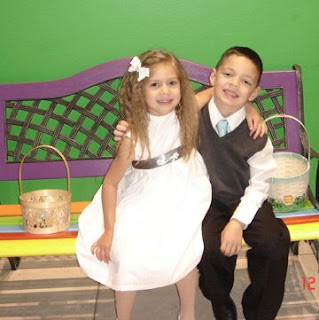 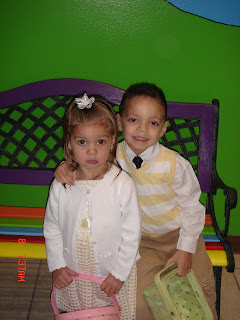 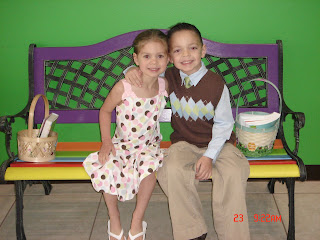 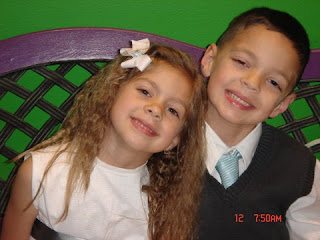 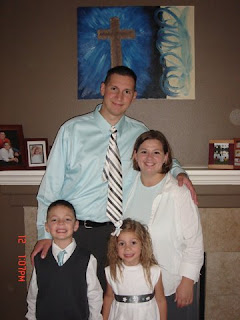 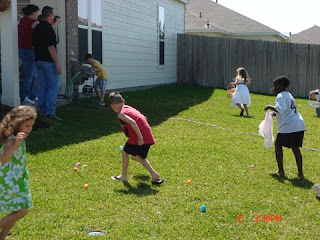 Hunting for eggs
Posted by The Brewers at 8:34 PM 2 comments:

I'm sure you guys have those moments where you really want to correct your children for manners, but what they have done is so hysterical that you can't catch your breath long enough to utter a word. Today I had one of those moments. Abi and I were shopping Joann's for fabric, we were maybe one of five people scattered throughout the store. Abi was looking at something a few feet away. She walks over and stands beside me, lets out one of the loudest farts I've EVER heard and then whispers "excuse me" to me. She then walks away while saying "Who ever just did that should say excuse me!" I was glad that there were not very many people in the store. I was laughing so hard I nearly peed my pants! We need to have the Act like a lady talk again I see.
Posted by The Brewers at 1:07 PM No comments:

So, I hear yesterday was opening season for baseball...it was the start of the season for Abi's t-ball team also! She was so excited to "go out there and show them how girls do it"! She said, "I'm gonna show them that girls rule and boys drool"! After I told her that she was on a co-ed team, she said, "oh, then I'm gonna show them that our team rules"! She also kept saying that she hopes her team wins...I had to explain that yesterday was only practice! She doesn't have the full concept of it yet, but she's getting there! She had fun, but was disappointed that her bat was going to get scratched up! She's so funny! Austin passed up baseball to play basketball this year, which should be starting in June. For now he wants to help Abi's team practice! 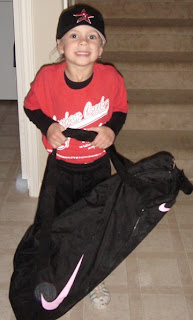 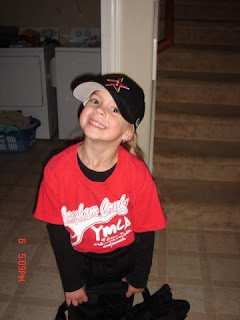 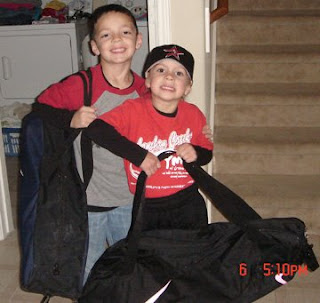 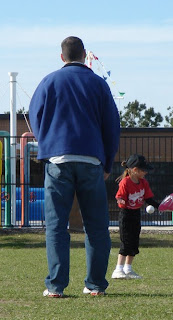 Mark and Abi tossing the ball!
Posted by The Brewers at 10:19 AM 2 comments:

My latest project from the sewing department is a baby quilt...although I'm not really sure you would call it a quilt because it is not actually quilted! It's the most cuddly blanket I've ever made, that's for sure. I mainly made it because I wanted something to work on, it's for no one in particular....I've listed it on Craigs list, I'll keep you posted as to weather or not it actually sells! 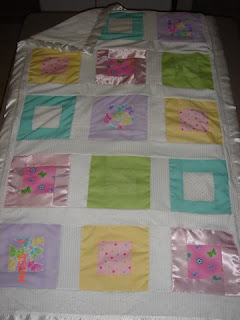 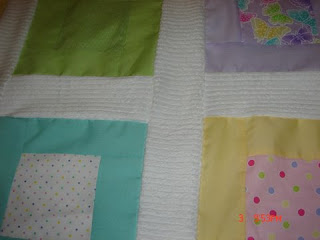 White minkie front and back...so, so ,so SOFT!

Other than that, I'll leave you with this really cute pic of Bandit, or Bam Bam as we call him! 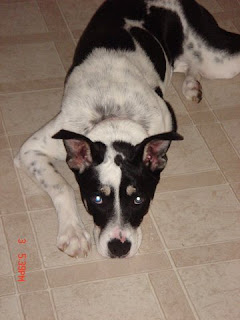