This holiday season has flown by! It seems like yesterday I was standing in line for black Friday! We have stuck with most of our traditions this year, with the exception of the Parade of Lights last weekend. The parade went on, but it was very cold and rainy and we were exhausted; so, we opted to stay home and have hot cocoa in front of a warm fire instead! This week I took 2 of my 3 remaining finals! YAY! Also, the Friday that I took the kids out of school early for snow, Abi informed me that she missed the gingerbread man tasting day that afternoon. So, there were fresh gingerbread men waiting at home for her on Wednesday after school! She and Austin had a great time decorating them...and eating them! 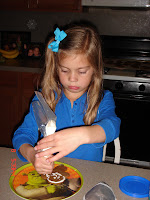 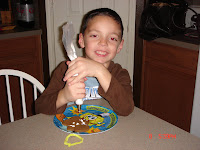 Austin decorating cookies
Monday, Mark's dad came over and took some family pics for us. They turned out pretty cute, so I'm posting some of my favorites.

We have been waiting patiently for a year for the Taylors' second annual Pancake and Pajama party. It was so much fun, again! This year, John read the Nativity story straight from the Bible. We made another ornament, Rudolph out of a bell, for the craft. We had yummy, sugar loaded pancakes, and of course, had a visit from Santa! It was a fun night visiting with friends and seeing the kids super happy! 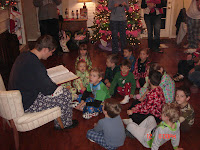 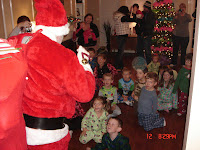 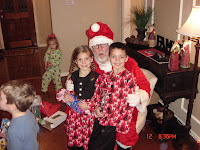 Abi and Austin with Santa!
Also, a second for the kids, they sang on stage at church again. They sang 'Go Tell it on the Mountain' and 'Joy to the World'. Austin sang with his hands in his hands in his pockets, like Joe cool...and Abi was really into doing the hand motions that went along with the song. I love kid programs, they are so cute! 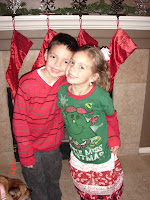 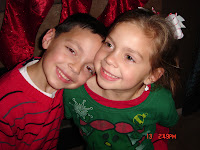 Just after the program
Posted by The Brewers at 9:59 PM

Wow, so much fun stuff! Pancakes and Pjs looked like so much fun. So bummed we missed it. I was in bed at 8:30 that night!