I don't know about you guys, but broccoli and brussel sprouts as a kid were out of the question for me! Shockingly, Abi LOVES brussel sprouts (Austin does not) and they both LOVE broccoli! When it comes to eating, Abi could out eat a grown man!!! A couple nights ago we had brussel sprouts, she loaded up her plate with the rest of them...

A couple of days ago we also had Maddox (or Xamod as he is known by the Brewer family)- They were so excited about going swimming, they put on their swim suits around 10am- the pool does not open until noon! So, below is how they spent their morning- swim suits and power ranger dress up! You can not tell, but in the pic Maddox has a power ranger mask, a cowboy hat, his swim trunks, and cowboy boots...they were so funny! 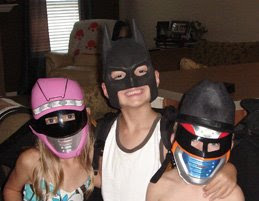 During the summer, Rave theaters offer free movies for kids. Austin, Abi and I met up with Naomi, Mer, and Grace, and Lizzie, Luke and Kelly to see Surf's Up. A cute movie, but I probably would not let them see it again (some inappropriate language for 5 year old such as shut up and stupid, which we do not use in our house). After the movie we headed over to Chick-fil-a for lunch and play. While crawling through the tubes, Luke hit his head on something (we aren't sure what) and acquired a nice 1inch gash above his eye. Lizzie rushed him to the ER where he got 9 stitches! We went to drop Kelly off afterwards, and Luke was up and around like nothing had happened! He is a tough little boy!

that video is so funny! I assume that's austin starting the praise music?!

Jenny,
That video is precious! Austin can sing really well and the fact that he's singing my favorite song makes it even better. I think you have a budding young musician there, tell him I said to keep on rockin! Miss yall!!