Austin had his first basketball game this past Saturday. He scored one basket and had two assists. He LOVES basketball, just like his dad! He was full of energy and a great team player, passing the ball when someone else had a better shot. Unfortunately, I didn't get any of his shots on film, but I did get some footage of him playing. Mark is coaching, of course, and is REALLY enjoying it! In this video, Austin is the one with the ball moving from the left of the screen to the right- he passes it to his teammate, and his teammate takes the shot. 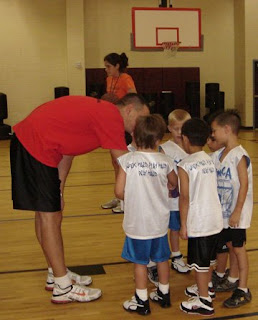 Team huddle after the game!