Genesis 1:27 (New International Version)
27 So God created man in his own image, in the image of God he created him; male and female he created them.
This is one of my favorite verses...why, you ask? Because I, myself, enjoy creating! God is THE creator, making me in His image...and here I am creating...(funny how that works!) I mention this mainly because lately I have really been feeling God telling me to create!!! It started around the end of this past semester. My church is doing a series right now called 'Faith comes by hearing'. The second week into the series we covered the Challenge of Perseverance. (Since I do not like to count my chickens before they hatch) I have continued to worry about finances even though I know Mark got his promotion at work- there are also uncertainties about the new jobs, one of them being exactly how his pay is going to work. It was in that sermon that I really felt God telling me that it was time to start sewing some things, and selling them. I even had the notion to start my own business (which makes my stomach turn with anxiety when I say it out loud!!) I made a couple of baby blankets and a taggie and listed them on Etsy.com. Apparently, a taggie is a trademark brand (who would have thunk it??) and they took my listing down. That discouraged me; so, I decided to take all of my listings down. That was that, I was done creating!!!! I had also listed the some items on Craigslist.com. Out of the blue about a week and a half ago, a lady e-mailed me about one of the quilts I made. She said that she really liked it, and wanted to know if I would make 2 full size quilts for her kids. I have never made a full size quilt before, so once again, I put up resistance. As you guys have also seen, I have been thinking a lot about how I want my sewing room organized. Currently we are storing some matresses for Mark's sister in there; so, we were going to wait to paint and put everything in place until after July when she could get the matresses. Some very big bricks have been hitting me in the head!!!! Elizabeth, Mark's sis, called this evening to tell us that she was going to come this weekend to get the matresses. Also, my friend Lori asked this evening if I would be interested in making something for her soon to be niece or nephew (God used you to hit me Lori!!!) Not to mention, our small group session this evening was about spiritual deserts...the place where God puts you when he wants you to shut up and listen. I have resisted selling any of my stuff because we didn't need the money....today Mark's check was VERY messed up (he'll be discussing it with the boss tomorrow) but in the meantime...we need the money!!!!! WOW....I am listening God, you finally have my attention!
Here some of the things I worked on today: 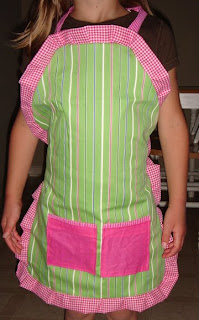 I made this one to sell 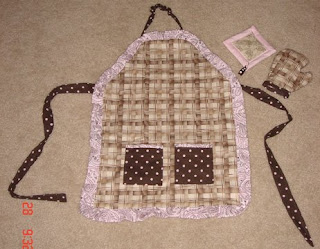 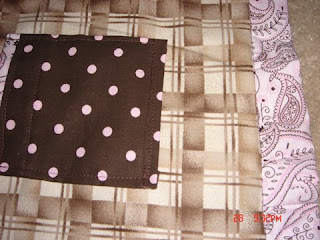 I made this one as a birthday gift
There are more to come....
What I have learned, and you should have learned today in Creating 101, is that when God is telling you to do something...don't hesitate...do it...
Posted by The Brewers at 9:53 PM

Yeah!!! So that means you are going to make the baby blanket for me?? I thought maybe you were not interested in taking on any new projects, so I didn't push the issue. I will get with you later on it.