Life in the Brewer Bungalow

﻿Ok, technically we don't live in a bungalow...but it is a fun word to say, right? Even though the local school district still has several weeks to go before summer vacation begins for them, here at our 'school' we are finishing up most of our books. Austin will complete his BJU Math 4 book this week, and had his last A&P class last week (he scored 112% on his final- the 12 point bonus was to label a blank body diagram- and his teacher gave him a certificate of completion). He is over half way done with his Easy Grammar 4 book, which he started after the Christmas break. We also made a trip to Barnes and Noble last week and both Austin and Abi got to pick out new books. Austin is into reading books about baseball, fiction of course. Abi is continuing to read the Junie B. Jones series, she's currently reading book 3. Austin is also close to completing his Heritage Studies 4 book. I gave Austin the 4th grade reading and math and the 5th grade science test from the 2008-2009 released TAKS test just to gage how he is doing. My biggest fear in homeschooling is that Austin and Abi will fall behind in their work. Austin technically should be in the 3ed grade this year; so, if he didn't do so well on the 4th grade tests, it would not worry me too much. He completely missed a couple questions on the science test because he said he didn't see them. I counted them wrong, just like they would have done on the real test. But my smart boy still scored a 90% on all three tests!! This week I am going to give him the writing portion to see how he does.
Abi is half-way through her BJU Math 2, Easy Grammar 2, and Horizons Reading and Phonics 2 books. Technically, Abi should be in first grade, and since she just started these books after the Christmas break, I'm okay with her not completing them before the summer break. Both Austin and Abi will continue to do some work through the summer, it just will not be as much as we do now. Abi has completed her BJU's Science 1 and Heritage Studies 1 books﻿, although I'll admit that they weren't very challenging for her. So, to kind of add to her Science curriculum, I ordered her a butterfly bungalow that comes with a certificate to order your three live caterpillars. Amazon.com had a great price on it (a whopping $10), and I ordered one of Austin's Christmas presents at the same time to get free shipping! Abi has been wanting a butterfly habitat for a while now, which she constantly reminds me of every time she sees a commercial advertising them!! She even names her caterpillars! 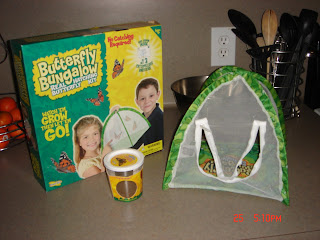 The bungalow comes in this box. The caterpillars only come after you use your included certificate to either order them online or send through snail-mail. 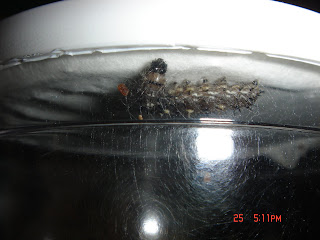 We've only had them a couple of days, and already you can tell that they are growing! Not sure which one this is, Abi jr, Austin jr, or Keetos, but Abi knows the difference between them. At least she claims to! 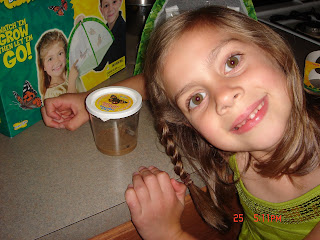 She takes them where ever she goes!
Even on our day off, the TV stays off most of the day. So, the kids are forced to explore and entertain themselves. Today, they practiced drumming on pots and pans. That explains my huge headache at the end of the day! But they sure did have fun! 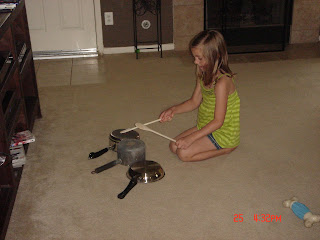 Abi and her drums 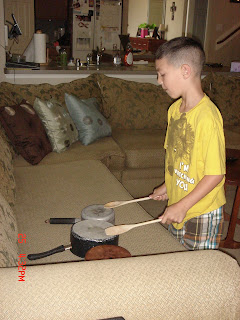 Austin was drumming so hard that he split on of the wooden spoons right down the middle of the spoon!!
Even on days off the kid-o's are encouraged to take some time to read. Austin doesn't need much encouraging, but Abi sometimes requires bribing!!!! She protests until she starts reading, and then she becomes so involved with the story that she giggles out loud when she's reading. That is music to a Mommy's heart! One rule is that they can read where ever they want, as long as they read! 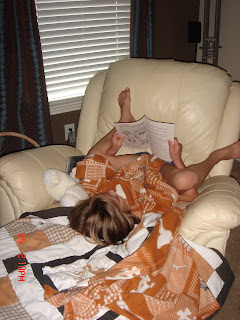 I'm still trying to figure out how stretching and reading fit together, but Abi makes it work! 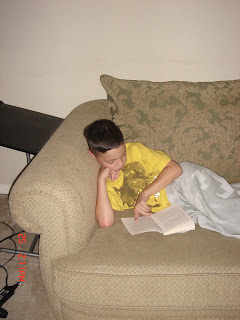 Austin snuggled on the couch
Posted by The Brewers at 10:59 PM