Keepsake and Why Marbles Matter

This week I have a keepsake that I want to record. Hopefully, one day﻿, the kids will look back over this blog and laugh at the incredibly silly stuff they did and said!!
On Wednesday, both Austin and Abi finished their work in record speed! But the rule we have in place is that the TV does not come on until 2:30pm. Even then they are only allowed an hour of TV. It's okay though, because Austin and Abi are pros at breaking out the imagination! On this day, they were using Bakugans to rule over their own lands. As I cleaned, I noticed that they had gone to the garage and borrowed the painters tape to mark off each of their own territories on the living room floor (which I didn't think to snap a picture of!) They each had some of the Bakugan and were making them interact. Austin, being 100% boy, wanted tot battle Abi's Bakugan and insisted that they go to war. Austin repetitively threatened to invade her territory and take it over. Abi, being Abi, refused Austin at each offer. Eventually, in frustration she blurted out, "Austin, why do we have to battle? Why can't we just live in peace? If you plan to come over her to my territory, you're gonna have to sign a  peace treaty first!" I laughed out loud that she knew and used the term 'peace treaty' in the correct context!!! That was a keepsake moment!
If you're reading this than you probably know my Abi is a firecracker! Last year's homeschooling brought many challenges, as our personalities constantly collided! This year has been refreshing (so far)! I can tell that as she gets older she is easier to work with. Or maybe it's that she has learned that throwing a fit gets her nothing but further behind in her work. Or maybe it's that we've found curriculum that keeps her interest at a peak. Whatever it is...I am thankful! This week in science, Abi learned about mammals and the 5 characteristics that qualify an being as a mammal. Her lesson included: 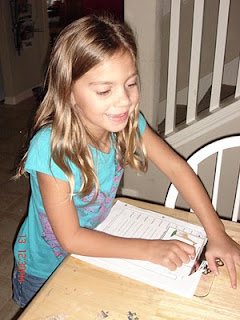 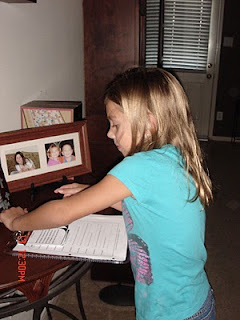 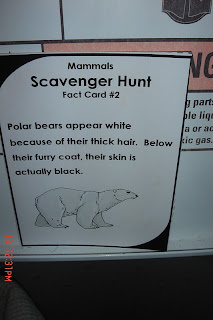 Abi had a list of questions that paired with the 18 cards that I hid around the house. 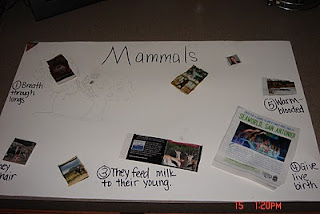 and a picture poster (I though I had more magazines for her to find pictures, but I guess I recycled them!! oops!)
﻿I'm still waiting for Austin's supplement for his science book to come in the mail. Luckily, his book has a few activities to do in the meantime! This week he learned about conservation of momentum in moving masses. His activity gave him the opportunity to observe momentum in different ways. Here, he lined marbles up in the crease of a hardcover book. He then rolled one of the marbles into the other and was able to see that the energy of the marble just transferred through the line of marbles and knocked the ending one away. He was very excited to see how it worked. It didn't hurt that the explanation in his book of how momentum works was about hitting a baseball!! 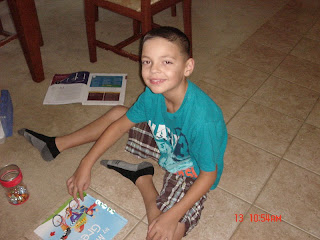 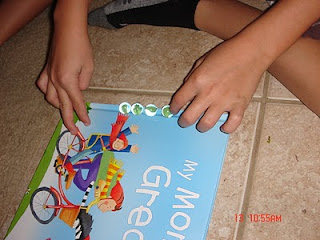 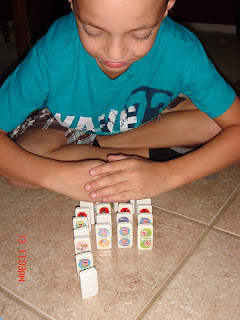 He also used dominoes to observe
After Austin's project, the kids kept the marbles out and played old fashioned marbles just like on Charlie Brown!!!﻿ Well, almost old fashioned...this is the indoor-because-it's-way-to-hot-outside version! 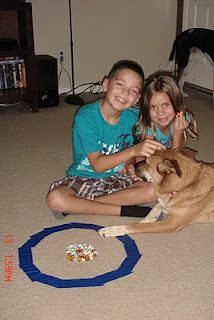