Back to Life, Back to Reality

I'm not gonna lie. I think about this... 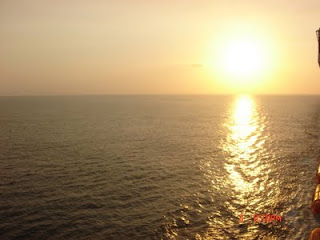 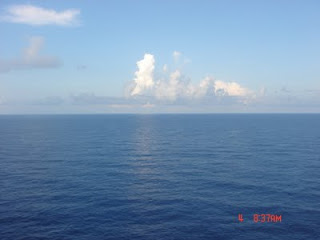 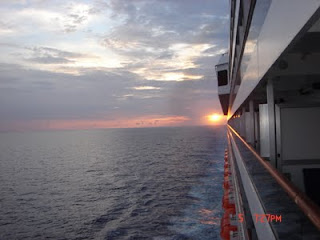 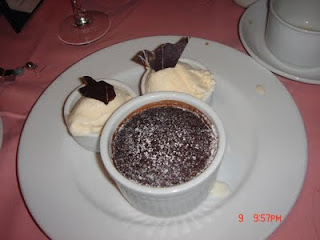 A LOT!!!
Life after a cruise is not as much fun as life before the cruise. So many great memories leave you longing to just get in your car and start driving just to see the beautiful world that God has given us! I have always said that I do not want to leave Texas. I take it back. I want to see the world and spend time admiring all of God's creation!!!
But my reality is life as usual and dreaming of the next vacation!!! I am blessed that I have a family to spend each day with. Last weekend Mark and I took the kids to the drive-in movie theater to see a double feature of Transformers 3 and Captain America. It started out very hot, but by 2AM when the movies were finally over, it was pretty chilly outside! We had to get there very early because we knew with those two movies, the good spots at the theater would fill up fast! Both movies were just so-so for me. Austin even mentioned his disappointment for Captain America! Abi talked (as usual!!) through both movies. 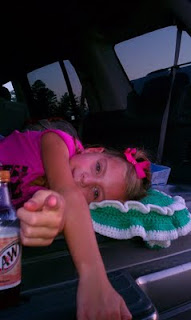 Abi, waiting for the movie to start
One of my favorite things to do is have lunch at a restaraunt with Austin and Abi. It's a chance for us to just sit and chat...and I don't have to make lunch! A few days ago, the kids opted for TGI Fridays. They had never eaten there before, but the gorilla from 'Zookeeper' sturred up some curiosity! 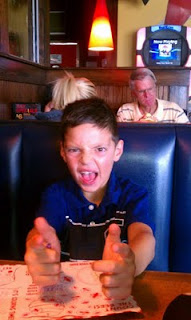 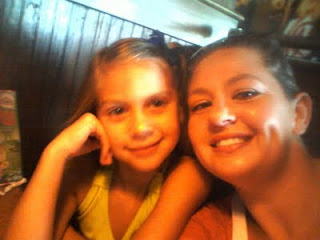 Me and Abi
We spend a good chunk of our time at the swimming pool. We have the selection of our neighborhood pool or the YMCA pool. Now we have an additional choice, Mark's dad and Wendy had a salt water pool installed in their backyard. After much anticpation, we got to break it in!! 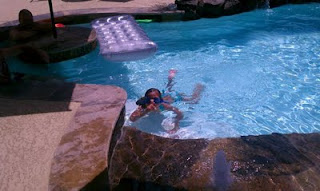 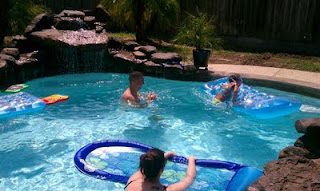 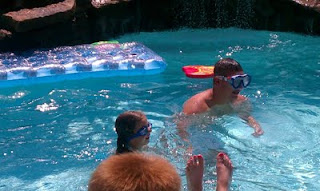 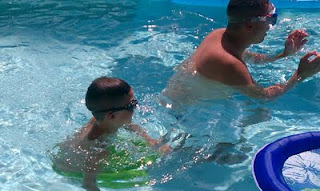 Austin and Mark
I have been feeling my sewing itch lately too. We took a trip to Joann's recently and bougth material to make a few projects. I completed one project this past week, Abi's tutu. She proudly wore it to church on Sunday, excited to see some of the glitter mark her spot anywhere she sat!! It actually didn't require much sewing. I measured her waist and cut a 1inch thick piece of elastic the same size. I sewed the elastice together and that was all the sewing required. The rest of the tutu making was cutting and tying. I followed the directions in this video (I substituted the elastic for the ribbon):
Here was the finished product: 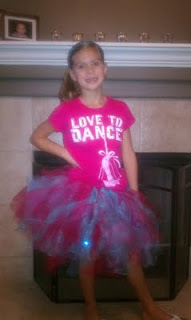 Abi's tutu
I have some more projects lined up in the weeks to come. I will be making another cowboy vest and chaps this week for an order in my Etsy shop.  I also will be making a Halloween skirt for Abi as well as a pair of pajama pants for Austin. I am working on a few bows too.  Busy, busy...but I wouldn't want it any other way!!
Posted by The Brewers at 10:33 AM