Back in the Saddle and the Tactile Learner

We are back to school. We took an extra week off, one of the many things I love about Homeschooling! We still have the same amount of work to cover before the end of this next semester, so we came into this week with our game faces on!

One of my challenges in working with Abi, is finding work that she will actually learn from and enjoy doing at the same time. She will still have to do some task here and there that she won't enjoy very much, but I do not want her to grow to hate learning! Abi is very much a kinesthetic/tactile learner. I know this because she is always in motion, even her "sitting still" is wiggly! She is a do-er. She is a lover of bright colors, and wants all of her work to be brightly animated with cute doodles. She is dramatic, everything about her is loud and stands out!!! She learns best when she is "in" the activity. For example, one afternoon while at one of Austin's baseball practices, she and I walked across the parking lot to a neighboring park. The park had walking trails cut around a beautifully landscaped pond. Along the path, there were native trees with little plaques that told about the tree, how Native Americans or early settlers would use the tree, and how to identify the tree. At the first plaque when we stopped to read it, Abi began complaining...she "hates" reading! Nevertheless, I began reading the plaque aloud. Half way through I stopped and she kept reading. She was amazed at what she was reading about these trees, and began pointing out which tree the plaque was describing. What really caught her attention was that this particular tree's roots were used to make a very common drink, Root Beer. We HAD to stop and read each plaque after that. Then we HAD to make a second round around the path to be sure we didn't miss any plaques!!

So, while on Christmas break, I have been reading about ways to make teaching Abi more bearable for me, and more interesting for her! Here are some of the ideas I read about or how I was inspired to create a task: 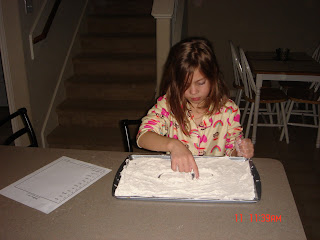 Spelling in flour: Instead of writing her spelling words on a boring ol' worksheet, she practices spelling them in a pan of flour!!

Instead of practicing phonics by pointing to words in a book, we made letter cards together. She says the sounds of each card at you place it down and then puts the word together. There are also more games to play with these, I will post about them after we try them out. 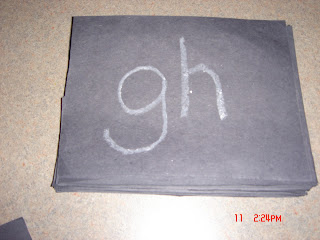 For certain phonic blends, we put the letters together on the same card and then write on the back the different sounds they can make 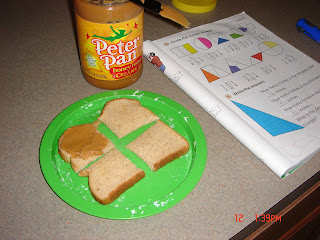 For math, there probably isn't a better way to teach it to Abi other than to use FOOD!!! Here we were talking about fractions and portioning. 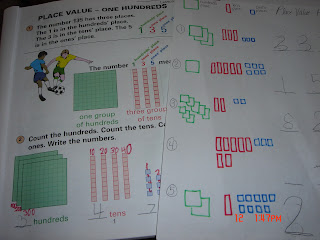 To show place value, use drawings.﻿ 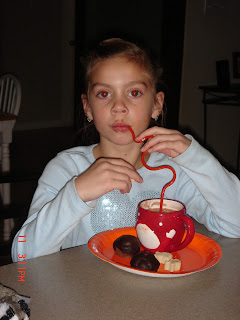 I'm pretty sure they didn't get hot chocolate at regular school served from their Mommy with love and special goodies!!!

Isn't math Yummy!!!
All in all, back to school has been very nice. How is Austin doing you ask? Let's see...
﻿ 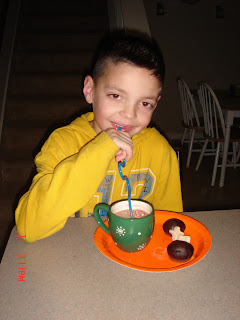 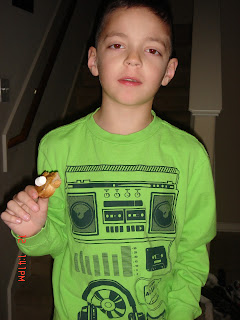 Looks like he's doin' great!!! He has had no problem jumping back into his school work. With his netbook from Christmas, he's able to look up a lot of neat things that interest him. This week he has been learning about the Wright brothers and the first flight, and also read about Amelia Earhart and her role in flight. Scholastic.com is an awesome resource for these topics and many, many others!
We also had the West family from our small group over for dinner this past week. The kids got along great...Ally rode Abi's plastic doll horse and Abi pretended to be her dog!!! 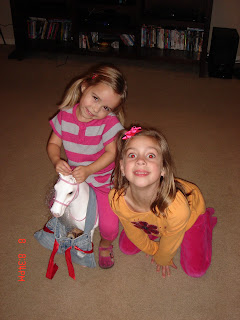