Austin came home ecstatic last week with a permission slip. After I picked it up and read it, I can only imagine the confusion on my face. It was a permission slip for Austin to BREAK A BOARD. What in the world? Sure enough, I had read it correctly. Apparently Austin's PE teacher is a martial arts instructor. Austin and a few other students did very well in PE last six weeks, and as a reward, they were given the opportunity to break a board in front of their classmates. Austin was SO excited! He ran off the bus to day and whipped out the remainder of the board he had broken to show me! 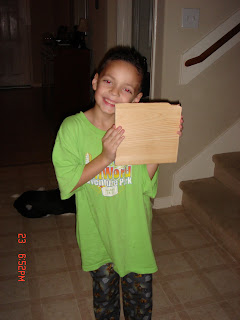 Austin and his prized board

This past weekend, Mark's dad, Wendy (lady friend) and Kenzie came over for dinner. They also stayed to watch the UT game. We had a fire going, and the kids started up a game of marbles by using colored tape to mark off a circle. They were laughing so much, one of my favorite things to hear! 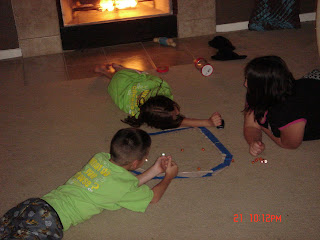 Austin, Abi, and Kenzie playing marbles
Posted by The Brewers at 5:58 PM