Most of you know that me and Abi knock heads pretty much all day every day. I will admit that it is because we are so much alike. I see her say some things exactly the way I say them. But there are times when she does or says something and I am not sure where it came from. Abi would tell you, "it came from my brain"! She has been extra silly recently. This was Mark and her at dinner tonight...I think I'm beginning to understand where the silliness is coming from! 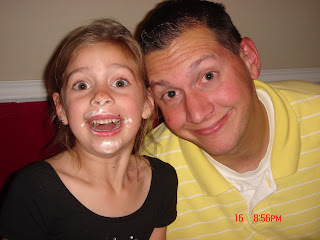 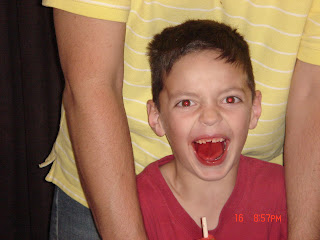 Austin, pretty silly too!
Yesterday the kids and I took one of our common shopping trips to the grocery store. Apparently, Austin and Abi were both on an off day, because both were being awful to the other. The final straw for loss of TV time and alone in their room time came when Austin did something to Abi, so she whacked him in the face. Good times. That was it, I was boiling mad. I told her that when she got home it was to her room. She fought and argued for a few minutes, but finally got the point when I told her that the best things she could do was just be quiet. Then came the 'I Love You Mommy'. Still both were going to their rooms. We get home, both help me carry in the groceries. Afterwards, I told them both to have some time in their rooms. So, Abi calls Peaches behind her and goes to her room. Then, about every minute, Abi would come out and ask if they could come out yet. After about the fifth time, I told her that I would add five minutes to their time every time she asked.﻿ A few minutes later...Peaches came running downstairs with this note stuck in her collar: 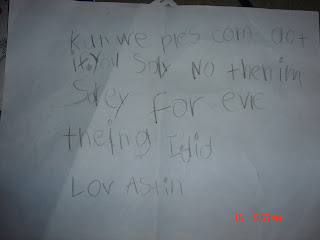 It says: "Can we please come out. If you say no, then I am sorry for everything I did. Love, Austin"
My favorite thing about this letter is that for Austin to be writing it, he misspelled ﻿his own name!!!! After that, of course I HAD to let them out!
Last night I played bunco at Sarah's house. I came home to this very specially wrapped 'Christmas gift'!! 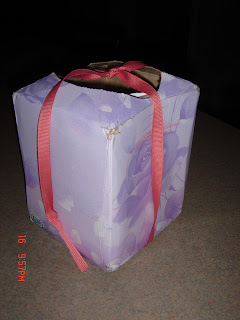 An empty tissue box that was once used for paper hockey on the kitchen floor, can you tell?
This is the gift that was inside:﻿ 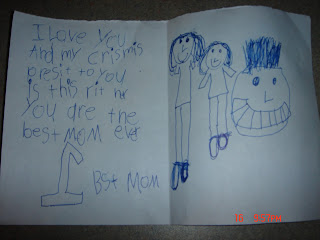 ﻿It says: "I love you and my Christmas present to you is this right here. You are the best mom ever. # 1Best Mom" and then there is a picture or Abi and me and a floating head.
﻿Each of these silly moments have reminded me that yes, we do have bad days, but even more so we have many more fleeting moments of laughter and silliness. I won't remember all the bad days if I focus on the the good ones. So, I am trying to make a point to give both Austin and Abi (AND MARK) extra hugs and kisses each day. Time passes so quickly. I don't want to forget this time. And when I think I have given them enough hugs and kisses for the day, I will give them each one more for the road...
Posted by The Brewers at 9:31 PM

You know the sweetness is from you. The silliness comes from her Dad! ;)