Playing on the Team!!

This fall Austin selected to play baseball. He played soccer when he was 4 and loved it! Then he switched it up and played T-ball when he was 5 (loved it) and then switched again and played basketball when he was 6, all of these through the local YMCA. He LOVES sports! We loved the YMCA because they aren't too pricey; however, this year, we really wanted Austin to play in a more competative league because in the past we have struggled with having other kids on the team that are as dedicated as he is. For example, when he was in soccer, he was the only kid on the team that was didn't have to be bribed or forced to stay out on the field and play. (Not that he is so special and great that he's better than the other kids, but it is true!! The other parents struggled to keep their kids interested the entire game) It was the same in T-ball. In basketball, we sometimes had to borrow players from the team we were facing just to play the game because our full team wouldn't even show up. So, switching to a new and more competative league, I think, was a great idea. I am really glad we made the switch. Austin has made some great new friends that I could see him staying friends with for a long time.


On to the point of this post...after a FUN and awesome season, the Diamondbacks won the championship! Granted their were only 8 teams and we were only allowed to play 4 of them in the playoffs. Our team played so well together. I loved hearing them cheer for each other. When Mark and I told Austin we love hearing him start chants for his team mates, his response was, "Well, we should build people up, not tear them down!" Well said. 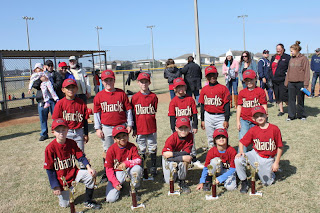 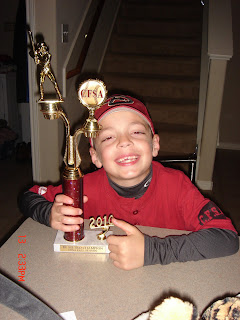 A proud boy!
As soon as they open up registration, I will be signing Austin up for the Spring season! Of course we won't let the gear get cold, he will still practice in the off season!
Posted by The Brewers at 8:20 AM

Way to go Austin! You rock!