All week the kid-o's have been having a combination of things going on at school, I've really been kept on my toes to remember it all! All week is drug awareness/red ribbon week- while also trying to raise money for new playground equipment. They made of goal for each class to raise at least $50. Monday was "Put the slip on drugs"- they were able to wear slippers in their classrooms. So, Saturday we went and got new slippers; Austin camo and Abi Hannah Montana fuzzy slippers! Tuesday was "Team up against drugs"...I bet you can't guess what team the AJB's were wearing...That's right, the Longhorns! Surprised, I know you are! Wednesday was "Sock it to drugs," they both wore mismatched, crazy socks! Abi wore one tweety bird with pink and hearts and one Texas red,white, and blue sock. Austin wore one of his soccer shin guards/sock combo and one Texas red,white, and blue sock. They looked so cute! Thursday was "put a lid on drugs," each wore a hat. Austin wore his Astros hat and Abi wore a purple hat that said, "I Love My Daddy"! Friday, the classes that raised $50, are able to "GO GREEN". Both of their classes were able to go green. So we spent all moring painting faces and doing Abi's hair. I made her some extra green bows last night; we put every green bow she has in her hair!!! 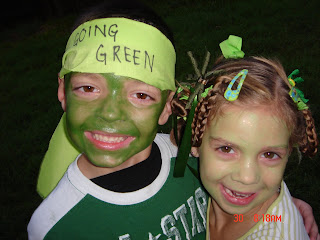 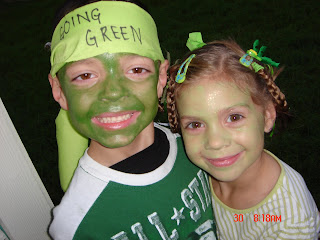 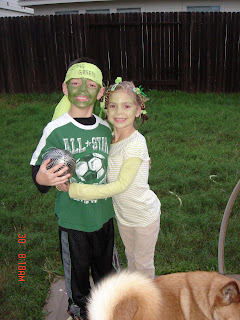 Halloween to soon follow!
Posted by The Brewers at 8:32 AM